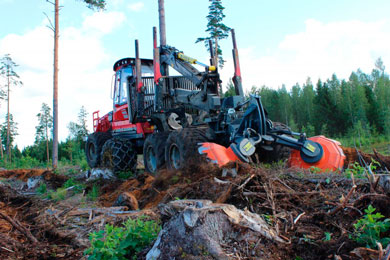 JSC “Latvia’s State Forests” (LVM) has already prepared soil in more than 3 000 hectares to carry out the forest restoration works planned for next year in an area of 10 500 hectares.

“Preparation of soil or planting sites in felling areas is a key prerequisite for successful reforestation by planting young trees. It is best to do it in late summer or autumn of the previous year, and before planting trees in the spring. This year, there are several positive developments in the forest soil preparation sector.

The range of service providers has increased; the forest machinery park has been supplemented and upgraded. Two new John Deere skidders, as well as several Bracke and one UOT tillage unit have been purchased in Latvia.

It is worth mentioning that in addition to the skidders used for transporting trees, several new tillage units will be powered by John Deere, Ponnse and Komatsu forest machines, which have already proven themselves in forestry,” says Edmunds Linde, LVM Forestry Planning Manager.

Soil preparation in the territory managed by LVM has been performed by seven service providers so far, but the new changes have facilitated the involvement of three new cooperation partners with relatively new sets of equipment. “It gives hope that work will be much smoother this season,” says Edmunds Linde.

Since its foundation in 1999, LVM has paid more than one billion euros to state and local government budgets. Company’s economic activities are carried out by maintaining and recovering forests, taking care of nature conservation, recreation opportunities and increasing timber volumes, as well as by investing in expanding the forestland and developing forest infrastructure – renovation of drainage systems and forest road construction. The volume of timber in the forests managed by LVM increases by 12 million cubic metres annually.