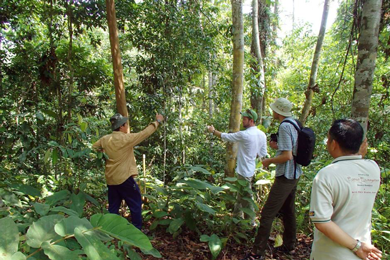 Land areas around the world totalling more than the size of Canada have been identified as having potential to be restored to good quality, healthy forests, a new study has found.

As the global effort to help tackle climate change by reversing the alarming loss of forests steps up, scientists using sophisticated satellite mapping have produced a world map identifying areas in which more than a billion hectares of former forest land and degraded forest land has restoration potential. That is about 6% of the total land area of the planet, and restoring forests to some of these lands could be achieved without prejudicing other vital land uses, such as food production. The Global Partnership on Forest Landscape Restoration (GPFLR) also says that the needs and rights of indigenous peoples and others who depend on forests must be respected when considering restoration projects. GPFLR will now work with individual countries and local communities to deliver restoration where communities benefit.

Preliminary analysis indicates that by 2030 the restoration of degraded forest lands could make the same contribution to the reduction of greenhouse gases as that which could be expected from avoided deforestation (70 Gt of CO2 emissions), and perhaps as much as twice that amount. The GPFLR will work with countries over the next year to clarify and refine these figures on a country-by-country basis.

The findings were announced on 26 November 2009 in London, England, at an international meeting of the GPFLR, of which the IUCN and the British Forestry Commission are founding members.