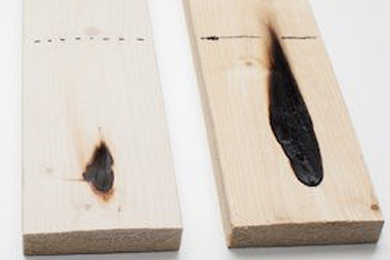 Wood is an established and versatile construction material, used to build everything from high-rises and airports to apartment buildings. It also, however, is not immune to catching fire. A new coating could help keep that from happening, and it’s actually made from wood.

Developed in Finland by scientists at the VTT Technical Research Centre, the solution incorporates nanocellulose, which in turn consists of microscopic cellulose fibres obtained from wood pulp.

Manufactured utilising a patented technology known as HefCel (High- Consistency Enzymatic Fibrillation of Cellulose) the gel-like nanocellulose reportedly has 10 times the solids content of similar materials. As a result, when applied to wood – which nanocellulose naturally adheres to – it’s very good at forming an airtight barrier that keeps oxygen from reaching that wood’s surface. This means that the wood is significantly less likely to combust when exposed to a flame.

It is thought that the coating could be particularly useful when mixed with a pigment, then applied to wood in the form of a sprayed- or brushed-on paint or stain.

Initial batches of the HefCel-based coating have reportedly performed well in lab tests, and an energy-efficient production process has been developed. The scientists are now working on scaling up that process, making it simpler yet at the same time even more efficient. They’re also currently looking for an industry partner to help commercialise the technology.