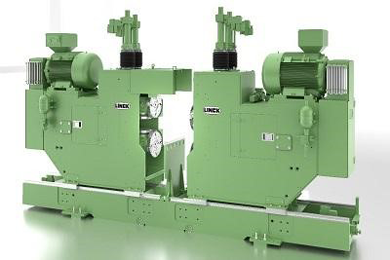 Linck to present a new profiler unit VPM 350 at LIGNA 2019. The family of VPM profiler units was extended by an additional machine model.

In addition to the high end machine VPM450, the smaller VPM 350 was developed to be used for cant heights of up to 350 mm and cutting depths of up to 75 mm.

The smaller adjustment paths and chip removal volumes made it possible to simplify drive and cutting tool design. There is only one drive motor per side whose power is distributed to the two profiler heads of one side according to requirement. The reduced adjustment paths allowed a shortening of the profiler head drive shaft with positive effect on the machine width and thus to keep to the dimensions of the VPF profiler unit. As a result, the VPM 350 corresponds to the VPF machine in size and processing possibilities and is perfectly suited to be installed in existing saw lines.

Downsizing the machine dimensions allowed for a further reduction of the masses to be moved, thus resulting in smaller gaps between cants for operating modes with sawing optimization.

Linck is the largest European manufacturer of sawmill equipment.