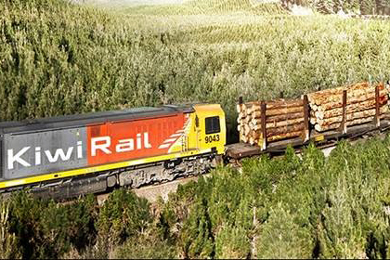 Yesterday KiwiRail announced it has increased the number of wagons on its daily trains transporting logs from Masterton to CentrePort.

“Last year KiwiRail moved 267,000 tonnes of export logs from the Wairarapa to CentrePort. Increasing the number of wagons from 30 – 45 a day, we will be able to move up to 370,000 tonnes a year. That’s about a 40 per cent increase in capacity,” Mr Miller says.

“Our log trains already avoid about 16,000 log truck journeys into Wellington each year. The additional rail capacity will avoid a further 6,000 truck journeys each year on the Remutaka Hill Road, the Hutt motorway and the pinch-point of Aotea Quay.”

“Not only does this help reduce congestion on the highways, it also reduces road maintenance costs, and transport emissions – given rail has 66 per cent fewer emissions per tonne of freight carried than trucks.”

“This is a great example of taking a multi-modal approach to transport. Trucks transport logs from the forest to the Waingawa hub but rail covers the distance to CentrePort. It shows how rail and road can work effectively together to create economic and social benefits for the people of the wider Wellington region.”

Given log harvests in the lower North Island are expected to see a sustained increase in the coming years, KiwiRail is working with CentrePort and the forestry industry on the potential of further capacity increases from the Waingawa hub.

KiwiRail is also currently developing a log hub at Wairoa, to transport logs on the recently reopened Napier-Wairoa rail line to Napier Port and the Government has announced potential funding for another log hub in Dannevirke.
To go to KiwiRail click here.