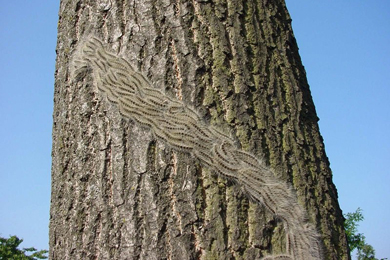 Confor has welcomed strengthened measures on the import of oak into England that are to be introduced to protect trees from the threat of Oak Processionary Moth (OPM).

Caroline Ayre, National Manager for England, said Confor had worked closely with the UK Government and its agencies to introduce the tighter controls. She added: “We had already produced a paper calling for an immediate ban of high risk trees. We hope that these restrictions are not ‘too little too late’ and ask that industry remains vigilant. The constant message is ‘inspect, inspect and inspect again.”

The new measures will only permit imports of certain oak trees, including those from OPM-free countries and those from designated pest-free areas including Protected Zones (PZs), an area of the EU declared free of OPM.

A Statutory Instrument (SI) – due to be introduced in Parliament shortly – builds on measures introduced in August 2018 and applies to all oak trees, except cork oak, over a certain size. This is because these trees represent the greatest likelihood of introducing OPM into the UK PZ, as they are more susceptible to pest populations and more difficult to inspect.

The restrictions will cover both imports from overseas and the movement of trees from areas of the country where OPM is already present – in London and surrounding counties.

Woodland managers, land owners, the forest industry and tree nurserieshave bneen reminded to remain vigilant  and to check recently planted large oak trees as a priority. The alert was csounded after the Plant Health Service identified OPM caterpillars on trees recently imported from the Netherlands.

OPM caterpillars feed on oak leaves and can increase trees’ vulnerability to attack by other pests and diseases making them less able to withstand adverse weather conditions, such as drought and floods.

Biosecurity Minister Lord Gardner said: “Biosecurity is absolutely key to everything we do and we must do more to stop pests and diseases crossing continents and borders. That is why as a country we have more Protected Zones than anywhere else in the EU. It is essential that we further strengthen our import controls on oak trees. These new measures will ensure robust protection for our oak trees from pests such as the Oak Processionary Moth.”

Nicola Spence, Defra Chief Plant Health Officer said: “We will continue to wortk with local authorities and land managers to tackle OPM in areas where it is present with a control programme of treatment and surveillancce. The strengthened measures will help protect against further arrivals of the pest on our shores.”

“The Plant Health Service has received reports of an exceptional expansion of the OPM population in parts of Europe due to the hot weather experienced last year.”

OPM caterpillars feed on oak leaves and can increase trees’ vulnerability to attack by other pests and diseases making them less able to withstand adverse weather conditions, such as drought and floods.

Dr Anna Brown, Head of Tree Health & Contingency Planning, Forestry Commission, said: “Those of us involved in importing or trading plants must maintain our vigilance against exotic pests and diseases such as OPM. There is a lot we can do such as buying British, only buying stock from reputable, responsible suppliers and inspecting imported plants.

“These stronger requirements will increase our protection but my message remains the same: inspect, inspect and inspect again. We can’t check imported plants too often for signs of trouble. Don’t presume that because your supplier found no evidence of a pest or disease that you won’t either. You might spot something that they have missed.

If you suspect OPM, you should not attempt to destroy or move infected material as the nests and caterpillars can pose a risk to human health. To report sightings of pests and diseases, use the Tree Alert Online Portal.