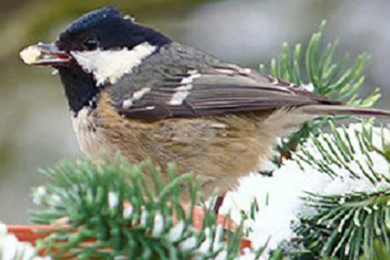 The Coal Tit is smaller than the Blue Tit and is very common in coniferous woodland and makes greater use of this habitat than other tit species. Their small size and agile nature allow them to glean food from between pine needles and pine cones with its narrow bill. Coal Tits use broadleaf woodland to a greater extent than their continental cousins and consequently have slightly larger bills. In Ireland, Coal Tit bills are even larger than their UK counterparts.

Periparus ater hibernicus is a unique sub species found only on this island. Irish coal tits have creamy yellow face patches whereas the cheeks of birds elsewhere are white. Small differences in bill size between individuals using different habitats may seem inconsequential but it is widely known among ornithologists that even very small differences in bill size can give a competitive advantage.

An analysis of records in 2007 by Ailsa McKenzie of Newcastle University in the UK, revealed that in the years when the seed crop was good in Sitka Spruce plantations in the UK, there was a decline in the use of garden feeding by the Coal Tit, but in those years when the Sitka Spruce seed crop was poor, Coal Tits increased their use of garden feeders. This pattern was also seen in Siskin.

The Coal Tit is the only member of its family that has learned to make a larder. Individual birds will visit feeders frequently but rarely eat the food immediately instead they take it away to a store so that when times get hard, they have something in reserve.

Seeds form an important component of the diet during autumn and winter, the lack of favoured invertebrates forcing the Coal Tit to switch its attentions to what is available. Even so, they will take any hibernating insects that they can find, sometimes even from the undersides of conifer branches heavy with snow. The combination of hoarding, the switch to tree seeds and the agility of this small bird, may explain why it seems to cope with cold winters more successfully than other small species.

The planting of conifers over the last century has been a blessing with the tits repaying the forester by eating harmful insects. In winter coal tits gather into flocks to roam the countryside. The ancestors of our coal tits probably came with the conifers at the end of the last ice age and the bird has been on its own here ever since.

The growth and stabilisation of the Cold Tit is thought to have been the result of Sitka Spruce seed feeding opportunities afforded by thousands of acres of maturing plantation forestry across Ireland.