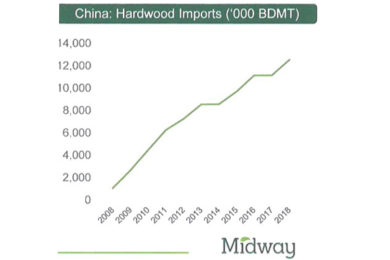 A big deficit in the supply of hardwood woodchips is expected in the Asia-Pacific in the next three-to-five years, with demand in China, already the world’s biggest importer, expected to continue growing, according to Australian forestry giant Midway Group. Source: Philip Hopkins for Timberbiz

Mr Price said China had been a strong and consistent importer of hardwood chips since 2007, with imports now more than 12 million bone-dry million tonnes. Capacity had expanded, with big growth in areas such as tissue production.

“There is an increased appreciation of higher quality eucalyptus woodchips. Customers are moving to longer term contracts and six-monthly pricing. The prices are equivalent to, or better than Japan,” he said.

Japanese imports had increased since 2013 despite predictions of a contraction, but long-term demand was expected to decline.

“With increasing competition from China, Japan has diversified its supply sources,” he said. However, biomass demand was set to take-off, with a number of dedicated biomass power stations active.

“Indonesia is now an importer. It has rapidly moved from an exporter to an importer due to increases in consumption and reduced availability of domestic fibre,” he said.

Imports had grown significantly this year and were on track to exceed one million BDT. In contrast, India was not yet a significant player.

“The market is yet to develop,” he said.

Mr Price said Vietnam’s hardwood woodchip supply had been predicted to tighten, but it continued to grow.

“They have very short rotations so have the ability to quickly respond to demand. There are good margins along the entire supply chain from grower to exporter,” he said. “The Government would prefer longer rotations and domestic value-adding.”

Vietnamese supply continued to grow to fill reductions from other countries.

“Other suppliers are expected to reduce due to a combination of domestic demand and limited plantation availability,” he said. These countries included Chile, Thailand, South Africa, Malaysia and Ecuador.

Demand for hardwood logs had affected the woodchip supply.

“There is potential to increase supply from managed regrowth forests,” he said.

NSW, Tasmania and Western Australia had certified, well-managed forests. In the longer term, additional supply required reinvestment and expansion of the plantation base, he said.

Mr Price said potential competitors to Australia in the Asia-Pacific were South America – Brazil, Uruguay and Argentina. However, prices would have to cover the high shipping costs. “It is difficult to see where further additional supplies will come from,” he said.

One possible source was Mozambique, or possibly Cambodia or another new South-East Asian supplier.