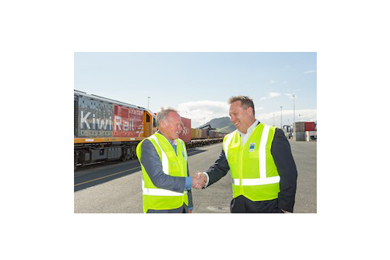 “The Ruakura development will provide a highly efficient rail hub in the Waikato by utilising our existing train services linking our MetroPort Auckland inland freight hub with Port of Tauranga, which is New Zealand’s international hub port and the main cargo gateway for the upper North Island,” he says.

“It’s an excellent example of Port of Tauranga’s partnership approach to providing supply chain infrastructure beyond our Bay of Plenty hinterland.”

“The agreement will see Port of Tauranga trains initially call at Ruakura four times daily and this is likely to grow. This service will underpin the significant supply chain savings we have been modelling with prospective customers and tenants of Ruakura,” he says.

About Ruakura – Ruakura is a visionary logistics hub designed to help importers and exporters unlock the golden triangle. Offering genuine scale, the core of the development is a 30ha inland port which will offer direct access to major seaports via main trunk rail services and the Waikato Expressway.

Complementing the inland port is a 192ha logistics and industrial precinct offering room to grow for businesses seeking a substantial footprint, and adjoining precincts for commercial, residential and retail use.

Ruakura is long-term project by Tainui Group Holdings (TGH) and its business partners. TGH’s track record includes quality developments at The Base, one of New Zealand’s largest shopping centres, and hotels at Auckland Airport and Hamilton as part of the $950m diversified portfolio it manages on behalf of 76,000 Waikato-Tainui iwi members.