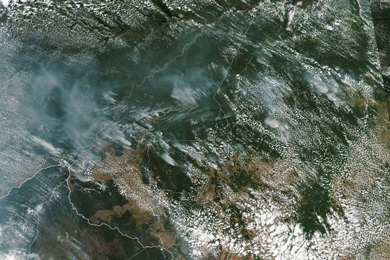 This satellite image provided by NASA on Aug. 13, 2019 shows several fires burning in the Brazilian Amazon forest. Brazil’s National Institute for Space Research, a federal agency monitoring deforestation and wildfires, said the country has seen a record number of wildfires this year, counting 74,155 as of Tuesday, Aug. 20, an 84 percent increase compared to the same period last year. (NASA via AP)

Huge tracts of the Amazon, which serves as the lungs of the planet by taking in carbon dioxide, storing it in soils and producing oxygen, are ablaze. Smoke from the widespread fires has turned day into night in Sao Paulo, and intensified a controversy over the Brazilian government’s land use policies.

The Brazilian Amazon has experienced 74,155 fires since January, according to data from Brazil’s National Institute for Space Research, known by the acronym INPE. That’s an 85 percent increase from last year and significantly higher than the 67,790 blazes since by this point in the year during 2016, when there were severe drought conditions in the region associated with a strong El Niño event.

“There is nothing abnormal about the climate this year or the rainfall in the Amazon region, which is just a little below average,” INPE researcher Alberto Setzer told Reuters. Speaking of the fires, he said, “The dry season creates the favourable conditions for the use and spread of fire, but starting a fire is the work of humans, either deliberately or by accident.”

The fires have covered Sao Paulo in dark smoke, and they are raising concerns that the rainforest, which is one of the most biologically diverse regions on Earth, may be suffering from land-clearing operations and other activities intended to transform the land for agricultural use.