Swedish Forest Agency: Gross felling is expected to increase in 2019 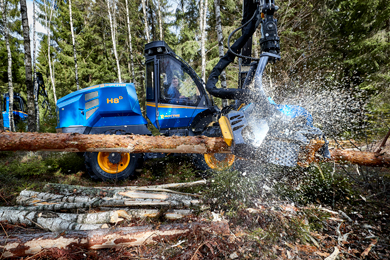 Harvesting in Sweden is expected to increase this year, showing a forecast from the Swedish Forest Agency. If the forecast stands, it is the highest figure since 2007.The gross felling in 2019 is estimated to be 94 million forest cubic metres. It is slightly more than 2018 when the preliminary gross felling was less than 93.5 million cubic metres.

There are several sources that are the basis for the forecast and point to increased harvesting:

– So far this year, forest owners have notified 6% larger areas for final felling than last year, suggesting that the interest of harvesting is great.

– According to the Swedish Forest Industries Federation, the production of sawn wood and pulp is expected to increase in 2019 compared to 2018.

– The stocks of roundwood and wood chips were more than 30% larger in the first half of this year compared to last year.

– In the forecast, the Swedish forest agency has estimated that stocks at the end of the year will be slightly larger than at the end of 2018, which means an increased harvest level.

At the same time, imports of pulpwood in the first half of this year are larger than the same period the previous year, while exports are lower, reducing the harvest forecast somewhat.