Harvest contractor making the most of the lockdown 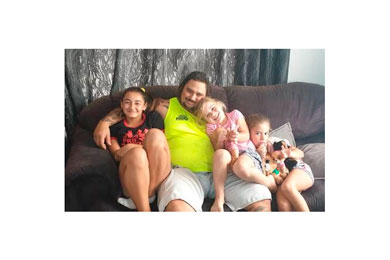 A good news story – and they’re rare as hen’s teeth right now. Whanganui father says he is rapt to be spending so much time at home with his kids, after years of working 80-hour weeks. The lockdown has seen logging company owner Harley Pomeroy trade his 3am wake-up and trudge into the dark forest for a “sleep in” and cuddles with his three young daughters.

“I have been in the bush for 23 years and I work between 70-90 hours a week and to actually wake-up at half past five in the morning and having my kids in bed with me – you can’t beat it,” he said. “I am not used to waking up in the morning having my kids next to me in bed and giving them breakfast, making them lunch, and seeing what they do day-to-day. I have never seen that side of things because I am never home for it.”

Pomeroy said his work commitments in the forestry industry meant he missed a lot of his two teenage sons growing up. He is relishing the opportunity under alert level four to have quality time with his daughters Jasmine, 11, Amber-Rose, 6, and Rhyana, 4.

“Go for a walk with the kids, have fun – that’s how I see my day. Okay, what are we doing today kids? What can we do together? And enjoy it that way.”

As for the business, Pomeroy said he had been worried about his workers, two of whom he had to lay off.

He is uncertain about how the company will fare after the lockdown, but he said the government’s wage subsidies had eased some pressure.