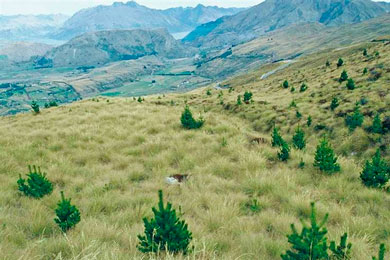 A nationwide plan to tackle more than 800,000 hectares of wilding pine infestations over the next year will generate up to 550 new jobs and help prevent future wild fires, say Biosecurity Minister Damien O’Connor and Civil Defence Minister Peeni Henare.

“We’re ramping up our wilding control activity in areas where jobs are needed most,” Damien O’Connor said.

“Budget 2020 included $100 million for wilding pine control through the Jobs for Nature programme. Over $36 million of that funding will be spent in the next 12 months as part of our four-year programme. That extends our work from 19 to 58 sites across New Zealand.”

“We’ll see significant work throughout most of New Zealand – in Northland, across the Central North Island, in Marlborough, Nelson/Tasman, Queenstown, Otago and Southland.”

Civil Defence Minister Peeni Henare was in the Mackenzie District last week to survey the fire damage near Lake Pukaki, the spread of which has in part been attributed to wilding pines.

“I saw the devastation first-hand, and heard concerns from locals that the wilding pines are a pest, and play a dangerous part in helping to spread fires.

“This Government investment will help prevent fires like this in years to come,” said Peeni Henare.

Minister O’Connor says wilding pine control is part of the Government’s commitment to provide economic support for people, with a significant environmental benefit.

“This is not necessarily about putting people into new careers. It is about finding work for people now, while their sectors recover from Covid-19.”

“Wilding control is largely seasonal work, with some year-round operations. This will allow companies to employ new people – and to keep on existing staff.”

“In many areas, like Queenstown and the Mackenzie basin, we’ll be removing longstanding infestations that have become a familiar part of the landscape. People are inclined to think any tree has some value. But the recent fires near Lake Pukaki, only a few years after the devastating fires in Flock Hill, have shown that wilding pines threaten the ecosystem, the economy – and the community.