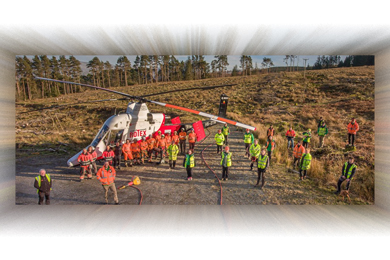 Forest, within the Lake District National Park in Cumbria, which were affected by the tree disease Phytophthora ramorum. The two-day operation involved an 18-strong Forestry England team and a contract harvesting team working alongside Swiss and Scottish operators, brought in for their expertise in helicopter felling – a forestry technique common in Switzerland but used only once before by the same team in the UK.

A stand of 150 diseased larch trees around Whinlatter Forest’s Wild Play and Go Ape high-wires course needed to be lifted vertically to avoid damaging the play equipment and climbing infrastructure. Helicopter felling was the most cost-effective approach to remove each tree, as conventional felling techniques would have led to extensive damage, costly rebuilding and loss of access for visitors and families wanting to enjoy the area.

The felling operation involved several steps and careful co-ordination between ground and climbing teams, and the helicopter pilot. First, the climbing team assessed the weight of the tree, dividing it into sections weighing no more than two tonnes – the maximum weight that the helicopter could lift – before securing a rope to each section. The specialist KMax heavy lift helicopter hovered overhead, lowering a steel cable to the ground which was attached by rope to a section at a time of each tree and pulled taught as the helicopter rose vertically. A cutter, communicating by radio with the pilot, then cut the tree by chainsaw and the helicopter flew the tree stems away over the forest to an area a kilometre away where another team processed the wood with a harvester. Because the helicopter was faster between lifts than a climber, three climbing teams served the helicopter in turn in a non-stop operation which successfully removed the larch trees and left the play and high-wires infrastructure undamaged and ready for reopening.

This was a complex forestry operation which needed meticulous planning and co-ordination between ground, climbing and flying teams. It was vital we removed these diseased larch trees to stop the spread of P. ramorum in the forest but we were determined to also protect the facilities which so many visitors enjoy each year. The whole operation had to be COVID secure with special permission needed from the UK and Swiss governments to bring in the specialist team to work alongside us. Fair weather and good visibility in Whinlatter Forest Park– England’s only ‘mountain’ forest – meant the whole job was done seamlessly, felling and extracting approximately 300 tonnes in two days with public safety maintained at all times.

We now have the opportunity to look ahead and ensure Whinlatter Forest is as resilient as possible in future decades supporting our people, nature and economy outcomes. The cleared site will provide a valuable open habitat for many wildlife species in the short term, and we have a detailed replanting plan to replace the felled larches with a mix of species resilient to changing climate conditions and future pests and diseases. The felling operation is the beginning of a new and exciting phase for this wonderful landscape, and we look forward to welcoming visitors back.

You can watch the helicopter felling operation in action. https://www.youtube.com/watch?v=6VT3XhXTWFY 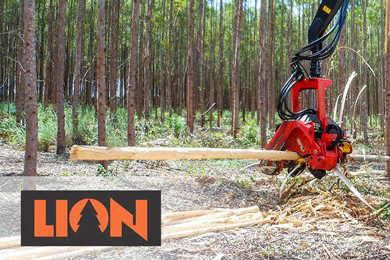