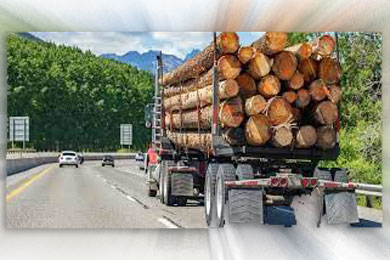 The drivers of logging trucks have to navigate school zones, tight intersections and small-town traffic because federal law prohibits them from driving on interstate highways. A new bill from a Wisconsin congressman would change that.

U.S. Rep. Mike Gallagher, R-Green Bay, said his bill would change what he calls “outdated” regulations. The measure has the support of Wisconsin’s timber industry and it’s bolstered by new research documenting the inefficiencies and potential dangers of barring the trucks from highways.

Every morning at 6 a.m., Scott Koerner, of Oshkosh’s Koerner Forest Products, maps routes with his drivers.

“Very often, we say, ‘Boy, if we could just jump on the interstate, this would be quite an easy run,'” Koerner said. “Sometimes, we’re paralleling that piece of interstate for 60, 70, 80 miles on county roads and state highways, just trying to keep the route still as short as we can.“

In particular, he said the routes that require drivers to pass through school zones are a stressor.

Gallagher said his eyes were opened to the issue when he did a ride-along with a logger in late 2019 and witnessed them navigating the massive vehicles through roundabouts and busy intersections seemingly not designed for them.

“They’re very skilled drivers,” Gallagher said. “But it makes no sense why we seem to make their trip from Point A to Point B almost as challenging as we can.”

Recent research supports the point. Forest resources professors with the University of Minnesota studying timber routes in central and eastern Wisconsin found interstate travel would reduce the time they take by more than 20 percent, would reduce fuel consumption by between 6 percent and 14 percent and would eliminate school zones from the routes.

The biggest difference lies in the vast reduction in the number of intersections and traffic lights the truckers would encounter on interstates. Researchers found they would be down between 64 percent and 88 percent. The findings echoed similar research out of the University of Georgia.