Office kitchens are all of a sudden overstocked with mince pies and some of the less-dedicated staff members seem to have all of a sudden had their senses dulled over-consumption of mulled wine (you know who you are).

It can only mean two things: Christmas is almost here and International Forest Industries’ annual Industry Voice survey has been published. And while not everyone gets excited about Christmas, everyone in our industry should be keen to cast an eye over the thoughts and forecasts from some of the biggest and most influential in the game.

The past few years have almost exclusively suggested strong and robust markets but this year anxiety has returned. This year’s Industry Voice survey was something of a throwback to those around 2010-2011, when the world was recovering from the financial crisis but things were still exceptionally volatile.

This of course has been the result of significant political events that have shaken confidence. The two key happenings were the UK’s vote on its European Union membership and the US presidential election. Both of these events provided a shock.

The UK’s pending departure from the EU has taken a huge chunk out of future EU budgets. What’s more, it is looking more likely that another major economy, Italy, may follow suit. With those two marching for the door it is questionable how keen remaining big guns within the bloc will be to support an EU weighted heavily toward countries that have traditionally been net receivers of EU funding.

This could mean the break-up of the EU or it could mean drastic reform or something in between. The issue is for international forestry markets is, simply, that no one knows – and markets hate uncertainty.

In the US, the concern is how President-Elect Donald Trump will handle the power he so badly wanted. Raw material markets have performed strongly since the November election on the back of Trump’s infrastructure spending pledges but there are dark clouds hovering as economists question how he’ll pay for all his promises. The coal industry for one is already coming to terms with the fact that, despite all the strong rhetoric, he won’t be its white knight after all.

Again, it is the lack of clarity that is hurting business.

This upheaval has been particularly damaging for US forest industries, where the resilient US dollar has made exporting forestry products into the resource-reliant Canadian economy or struggling Europe exceptionally difficult.

At the same time, Canadian producers are having a field day, while established European brands are finding themselves with an opportunity to move into the US market using the advantage of lower home-based operating costs and sales in stronger US dollars.

These challenges and volatility may be the new normal. Most economists are predicting political and fiscal tumult for the foreseeable future.

However, somewhat counterintuitively, this does not mean innovation has stopped. Far from it.

Our respondents to the Industry Voice survey said the latest generation of forestry professionals saw just how important the latest technology was in running profitable businesses resilient to market swings – far more so than their predecessors.

Contrary to the idea that technology was complicated and would therefore complicate what should be simple businesses, most professionals these days acknowledged there were smarter ways to operate and technology could make operating more straight-forward and comfortable for managers and for those running the tools.

And, of course, keeping in step are the suppliers, which continue to spend big on R&D and cite innovation (along with customer service and after sales care) as the key point to securing new business. 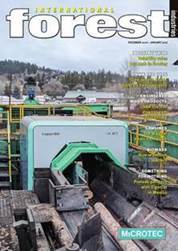